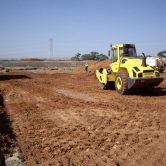 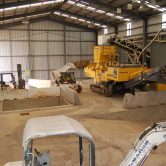 The Incitec Pivot site located in Parafield Gardens, South Australia, was required to be remediated in order to redevelop the site. Past practices on the site involved blending of pesticides, which had contaminated a significant volume of soil across the site, as well as groundwater with organochlorine pesticides (OCPs). The two main remediation activities involved the excavation and treatment of the OCP contaminated soil and the treatment of the OCP contaminated groundwater.

The OCP contaminated soil, which exceeded site guidelines was excavated from specific areas. The soil was then transferred to a treatment shed located on the site in order to treat the soil to allow it to be disposed of. Over 4,000 cubic meters of OCP contaminated soil was excavated and treated using an innovative process centred on the Komatsu Reterra BZ210 soil recycler.

The treatment method developed involved a chemical fixation process whereby two reagents were required to be added to the soil at a strict addition rate. The reagents were a liquid that had to be added first, then a powdered solid that was added after the liquid reagent had reacted with the contaminants in the soil. The process was skilfully delivered by utilising the Reterra’s liquid manifold injection system, which allows liquids to be added to soil that ensures a homogenous distribution throughout the soil, and therefore increases the efficacy of the process. Once the reaction had taken place, the powdered reagent was added to the contaminated soil using the Reterra’s dedicated reagent additive hopper.

Once the contaminated soil treatment had been completed, environmental consultants took samples and for analysis. All samples passed the rigorous QA/QC testing requirements, and the material was safely disposed.

Contaminated groundwater treatment involved the installation of two trenches installed with geofabric, slotted injection pipe and gravel fill to a depth of 6m.  The trench was then backfilled with spoil and injection pipe access pits installed in order to capture the contaminated groundwater, treat it to the required standard, then reinject the treated groundwater into the same aquifer. Groundwater treatment occurred for a number of months during which time the majority of OCPs were removed and the site was suitable for its intended use.