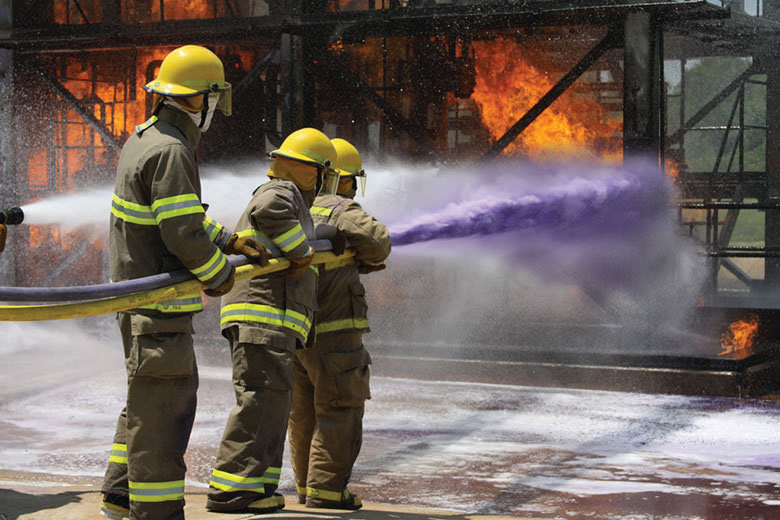 Per- and Polyfluoroalkyl Substances (PFAS) are a class of manufactured chemicals that have been used since the 1950s to make products that resist heat, stains, grease and water. There are over 6,000 individual PFAS identified to date. Of these, there are two that are commonly referred to which are Perfluorooctane Sulfonate (PFOS) and Perfluorooctanoic Acid (PFOA).

PFAS have had many uses in common household and industrial applications. These include stain resistant applications for furniture and carpets, fast food or packaged food containers, makeup, personal care products and cleaning products.

Perhaps the most prominent application of PFAS is their use in firefighting foams referred to as Aqueous Film Forming Foam (AFFF). AFFF has been used extensively worldwide, and within New Zealand, from about the 1970s by both civilian and military authorities, due to its effectiveness in extinguishing liquid fuel fires.

The historic use of PFAS-containing firefighting foams has resulted in areas of Defence bases and Airports around New Zealand becoming contaminated with PFOS and PFOA. Over the past five decades, these chemicals have worked their way through the soil to contaminate surface and groundwater, and have also migrated into adjoining land areas.

PFOS and PFOA do not break down in the environment and can travel long distances in water and air currents. They have been shown to be widespread global contaminants and many countries are now monitoring and restricting their use.

PFOS and PFOA have been shown to be toxic to some animals, and because they do not breakdown they can bioaccumulate and biomagnify in some wildlife, including fish. This means that fish, animals, and even humans may accumulate high concentrations of PFOS and PFOA in their bodies.

As a specialist environmental remediation contractor, McMahon Services New Zealand provides the equipment and know-how in treating PFAS with a range of reagent products. We are able to do this by having an understanding of the technical requirements of treating PFAS, as well as using state-of-the-art, innovative treatment equipment.

The PFAS contaminated soil and reagents are mixed in a chamber consisting of a soil cutter and three flailing hammers, then discharged via another soil cutter. This ensures there is effective mixing between the reagent and the contaminants. The whole process is controlled with an onboard computer system, which monitors throughput of reagents and soil to ensure volumes of material processed are accurately known.

McMahon Services is a highly experienced environmental remediation contractor capable of delivering unique, complex and large-scale treatment projects. We can deliver an innovative and compliant approach to the management and treatment of PFAS contaminated soil and water.

Need a proven solution to treat PFAS contaminated soil and water? Contact the expert team at McMahon Services to assist you with safe, cost-effective and innovative treatment services and advice.
MAKE AN ENQUIRY